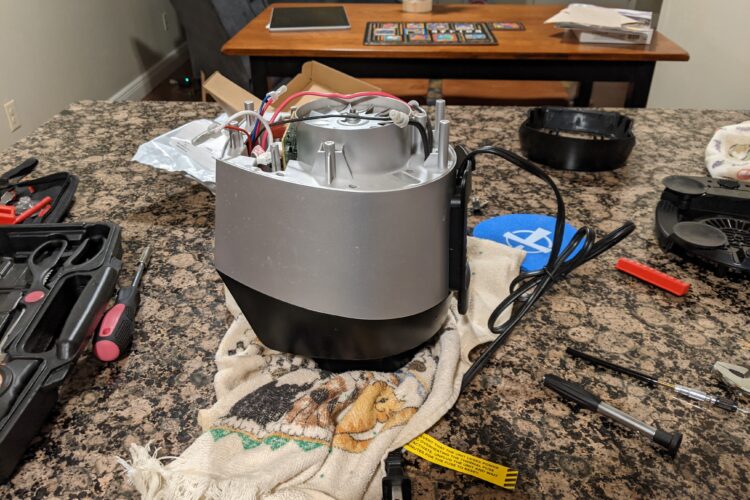 Many of the objects that people use today lack transparency. The slick shells of many of our favorite devices do not invite one to see how the parts hidden beneath them work.

Last Thanksgiving break, I had a problem. My Ninja blender wouldn’t turn on.

It wasn’t unexpected, it had been gradually getting harder and harder to turn on and randomly turning off mid-blend. But on this particular morning, I really wanted a smoothie and it would not turn on at all! “Oh well,” I thought, “I’ll just have to buy a new one.”

Settling for boring toast (I’m taking some narrative leniency here), I sat down to work on an article based on an interview Elizabeth Jungkind and I conducted with Dr. Edward Clapp at Harvard. Dr. Clapp studies creativity and making–and we talked about the idea of “maker empowerment,” that when we learn to make (and fix!) things, our agency increases and we have more control over our environment.

And control over my environment was exactly what I was missing. I wanted to have a smoothie but my blender wouldn’t turn on.

I decided I was going to attempt to fix it. I soon discovered that those folks at Ninja really did not want me to fix it–simply taking apart the appliance required research, special tools, and perseverance.

The first challenge was taking the blender apart. After some unsuccessful attempts at removing the screws, I turned to YouTube. I learned there were likely “locked” screws that required a special kind of screwdriver. I culled the plethora of tools on Amazon, ordered a repair kit (left) that I hoped included the right kind of specialized screwdriver, and once again attempted to take the blender apart.

I found a tip that worked for the special screws…but then there were some screws that were down a deep shaft. Despite my attempts, I could not get them off with the tools I had. In fact, my attempts led to a broken screwdriver and stuck screw tip. I headed to the hardware store and found a long screwdriver that I hoped was the size I needed. Using my new screwdriver and some elbow grease, I removed the final screws and took the blender apart.

I finally get the “slick shell” open and discover that what is inside is NOT like the inside of the blenders on YouTube. I realized that, despite the name of my blender model being the same as what was shared in the YouTube video and the outside looking the same, the inside was significantly different. 🤷‍♀️

Ultimately, I played with some springs and screws, trying to conceptualize how the blender worked and why it wasn’t turning on. Although I didn’t fully understand the inner workings, I had a basic hypothesis about the problem and attempted some solutions.

In the end, I thought I was on the right track but wasn’t sure that I was actually fixing it….but then I plugged it in. Shockingly, it worked! My blender once again turned on (and stayed on!) consistently.

Through my blender-fixing experience, I gained a deeper understanding of what Dr. Clapp means by maker empowerment and how I could increase agency by tinkering with the things around me. The blender itself might be considered a type of oppressive design–the types of screws, placement of screws, and lack of transparency were all an attempt to take away my ability to fix the blender. The inside was locked away, the inner workings hidden from view, and it took a fair amount of effort (and some new tools) to take back control.

But–and this is important–finally breaking open the blender and fixing it was also empowering. I have a better understanding of how my blender works. I can open it and make it work better (or at least differently…). My tinkering paid off–if not literally (the tools cost almost as much as a new blender would), then at least figuratively.

Now I just need something else to break so I can make use of my new tools.